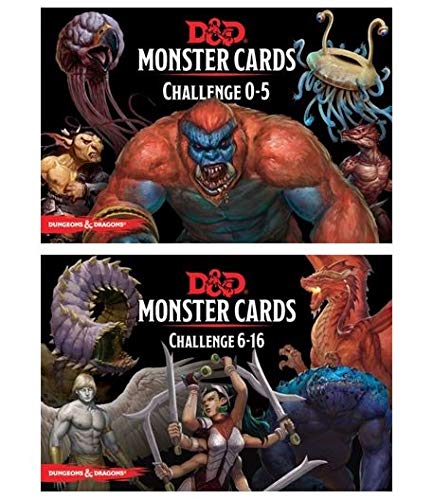 What about dragons? It's Dungeons & DRAGONS, after all, right?

Yeah. They include wyrmling in the 0-5, and Young in the 6-15 sets. What about the Blue Adult dragon (Challenge 15) and the Green Adult dragon (challenge 14)? Not here. Also, ONLY the base chromatic dragons are represented. There's not a metallic to be seen.

There's a wealth of other monsters that aren't included in these cards as well. The Beholder. THERE'S NO BEHOLDER. IN A LICENSED D&D MONSTER CARD SET!?

So in the end, while they're good for what they are, they're a waste of money and not a valid resource, because in the time it takes for me to sift through them and see if the monster I need is there, I may as well just print off the stat blocks I need myself from scans.

After reading a few posts, it seems like they deliberately omitted anything that has a lair or legendary action from the card list. It's legit...a joke. Quite frankly, this is a cheat from Gale Force Nine, from whom I expect a LOT more, and my only assumption is that their rationale is greed: down the road we'll see Volume 2 of the monster cards that fill the missing holes. We'll see a "DRAGONS!!!!!ONE ELEVEN1!!11!!" set that will reprint the dragons they've already done, plus 75% of the others (so they can do a volume II of that one, too), etc.

I don't begrudge a company making money. They're a business, after all. But this, quite frankly, is a cheat. At best. It's like finding a cure to a disease, but instead breaking it out into lifelong treatments so you can keep fleecing people for their hard-earned cash. How about instead of cheating people with incomplete products, you actually INNOVATE and produce NEW, USEFUL product? That would be a solid business model. This is dishonest greed.

If I could, I'd return these and get my money back. They're a ripoff. Don't buy them. In fact, after seeing how woefully incomplete these are, I'm not even going to bother with the spell cards they produce, as I don't even want to think about what important spells aren't included in those and have nightmares of discovering that something as basic as Fireball or Lightning Bolt might not be there. After all, they can't even be bothered to put a vampire in their monster deck, so...

If you're interested in the cards that aren't included, and an informative discussion on the issue (which I wish I would've seen before I wasted my money on these), check out this Reddit thread.