Showing posts from March, 2012
Show all

A Bit of Shameless Self-Promotion

March 28, 2012
I’m posting this here because of all my blogs, I have the most followers here. I’d like to encourage all of you to take a look at (and if you’re so inclined) to follow my new blog, Overpriced Popcorn: Film Reviews for the Rest of Us . I started this blog because I spend a lot of time complaining about film critics, how arrogant they tend to be and how off the pulse their fingers tend to be, as evidenced by the fact that there’s usually a 15-20% difference in positive reviews between critics and audiences over on Rotten Tomatoes. Given that film critics’ jobs are to educate the public on what’s good and bad, it seems odd to me that critics are so divorced from what the public actually likes. I’m not saying I’m the be-all, end-all solution, but I thought that I should put my money where my mouth is, and make an effort to do a review blog from the perspective of those of us who pay to see movies. I’m aware that the site will probably irk a lot of people in the sci-fi/fantasy
Post a Comment
Read more

March 28, 2012
Just testing a new setup feature. Nothing more to see here.   I know you’re watching me.   Why are you watching me??   Oh…because I asked you to, right.   Well, nothing to see here right now.  Move along!
Post a Comment
Read more

I have started (yet another) new blog

March 21, 2012
http://overpricedpopcorn.blogspot.com/ This one is intended to be a blog of film reviews from the standpoint of those of us who actually pay to see them, rather than the film critic elite--when you go to Rotten Tomatoes, think of this as reviews posted in the "audience" section rather than the "critics" section. I'd appreciate followers--I'm kicking off this weekend with John Carter and The Hunger Games.  I may re-post some older reviews I've done elsewhere as well, such as Freddy v. Jason and Conan.
Post a Comment
Read more 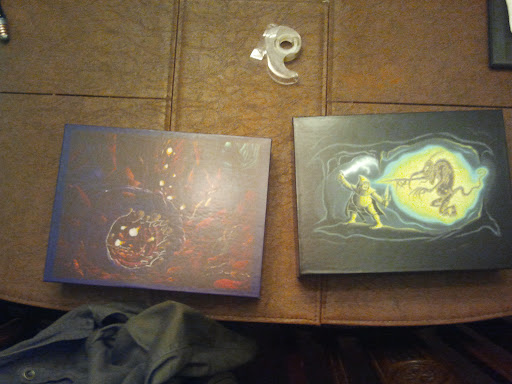 Many of you will probably be aware that several months ago, Brave Halfling Publishing announced the release of old school gaming boxes, which are simply nice boxes with art by old school luminary artists Erol Otus and Pete Mullen .  I ordered one of these boxes, before the Pete Mullen design was announced.  BHP had some printing issues with the original run, which led to delays in the release of quite some time. John from BHP was excellent with communications through this, and offered either a refund, or a second box at no charge, to make up for the delay.  I opted for a second box, because really, who can't use another box?  So, after what seemed like forever, I got a package in the mail yesterday. Imagine my surprise when not only did I get a second box, but the second box was of the Pete Mullen design!  Bonus! So I thought I'd show you what all fits in one of these boxes, and give you my thoughts. First things first: the photos. I am saving the Pete
3 comments
Read more

March 05, 2012
This post won't be about D&D specifically, but I think it should still be of use to old-school DMs.  It's more of a general philosophical pondering about the art of game mastering.  Bear with me--my thoughts are a bit disjointed today, but I've been thinking about GMing in general lately.  Particularly what I think of as the "Magnum Opus" campaign. I'm not sure if other GMs experience this, but back around the fall of 2002 or so I began running the Buffy the Vampire Slayer RPG, right when it came out. Our group took to the game like fish to water; we were the first group to have a website dedicated to the game.  We were the first group to cut "opening credits sequence" videos that I posted to our website.  We were the first group, when everyone started making credits sequences, to do a full-length music video for the series theme song. In many ways, at the time, we set the standard for BtVS RPG campaign websites. I actually cut soundtrack albums
1 comment
Read more
More posts