Showing posts from May, 2009
Show all

Races of the Wasted Lands

May 31, 2009
OD&D is pretty clear that "there is no reason that players cannot be allowed to play as virtually anything, provided they begin relatively weak and work up to the top..." ( Men & Magic, p. 6). Thus, I'll probably work up other races to add into the basics as I go--I've always been a fan of canine races, for example. But for now, here are the niches into which the core races fit. It should be noted that these are campaign notes, not game ones. In other words, Humans, Elves, Dwarves, and Hobbits have the same racial abilities (mechanically speaking) as listed in Men & Magic. Humans: The most populous single species in the world, humans are currently battling to "tame" the wilds of the Wasted Lands and create a new civilization from the ashes that came before. The godswar, so many thousands of years ago, devastated the lands and drove more than a few sentient species to extinction. But humankind, ever tenacious, has once again crawled from
1 comment
Read more

May 30, 2009
Legend has it that many, many thousands of years ago, the gods were but mortal men and women, like all of us. These men and women performed great deeds of heroism, and eventually became legends. The legends gave way to mythic undertakings as the Great Heroes in time ascended the Celestial Stairs and became gods. In time, other men and women, jealous of the apotheosis of the gods, sought their own pathways to power and glory. Not all of these roads were walked in the light; many contacted the Ancient Ones through dream-magic and blood rituals, selling their souls and the souls and lives of innocents in their quest for godhood. The Ancient Ones--their names make men shudder, women wail, and children hide shivering in horror. The Ancient Ones--Azathoth, Yog-Sothoth, Shub-Niggurath, Hastur, Nyarlathotep, and their kin, their legions led by their high priest and cousin, Great Cthulhu. It is said that the Ancient Ones made humans and our kin, as slaves, playthings, and food. But sc
Post a Comment
Read more

Rules options for The Wasted Lands

May 29, 2009
OD&D eventually had five original supplements, and recently with the advent of Swords & Wizardry , more and more folks are producing new OD&D supplements. For purposes of this blog, and unless otherwise noted later, I consider OD&D to consist of Chainmail, the original 3 brown books (hereafter LBBs), the five supplements ( Greyhawk, Blackmoor, Eldritch Wizardry, Gods, Demi-Gods, and Heroes , and Swords & Spells ), as well as the Carcosa supplement that has recently been released. In addition I will be drawing some inspiration and information from the first edition Deities and Demigods, only because it has more complete information on more pantheons than GDG&H and because in some ways I like its presentation of the Cthulhu Mythos better than that in Carcosa, though I will draw from "C" as well. So, given these sources, here are the rules I am allowing. I posted these previously over on the OD&D forums . These are also subject to change as I go
1 comment
Read more

Welcome to The Wasted Lands 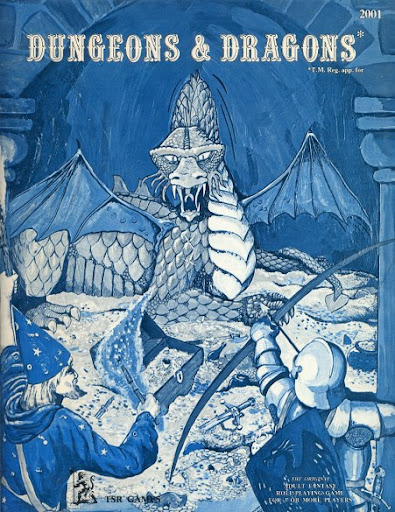 Catchy title, ain't it? Not so much, I know. It's a bit cheesy and cliche, but it'll work in the absence of a more evocative title. So, what is The Wasted Lands? The Wasted Lands is a pet project of mine: a campaign setting/"sandbox" for the Original Dungeons & Dragons rpg published between 1974-1979. And when I say Original D&D, I don't mean this: And I don't mean this: And I sure as heck don't mean THESE... No, when I say original, I mean just that: ORIGINAL Okay, now that we have that out of the way, let's move on, shall we? *grin* Since I became involved with the Old School Movement, my fascination with, and love for, OD&D has grown exponentially. I study it as a scholar studies his chosen field, and I adore the base simplicity of it. I've come to hold the opinion that the current trend in RPGs--to have a rule or system covering every situation and circumstance--is just wrong. "The more fi
2 comments
Read more