Showing posts from July, 2009
Show all

Map of the Hyborian Age 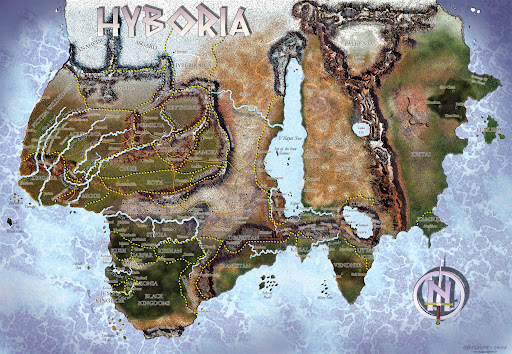 The above is my favorite Hyborian Age map that's been done to date (despite the fact that it has "HYBORIA" in huge letters at the top--pet peeve of mine). Click the map for a full-sized version over at http://hyboria.xoth.net .
Post a Comment
Read more

July 31, 2009
The Races of the Hyborian Age Part I Fans of other versions of Hyborian Age role playing will note that my racial divisions disagree with some of the others--particularly Mongoose's, which is an exceptionally detailed breakdown of races, sub-races, and pseudo-races. For OD&D, I think it's best to keep things simple. I will, however, be adding Zingarans to my initial list of races, as on second thought I think they deserve a separate writeup. I will not be doing detailed writeups of societies and cultures here, as these can be found in Mongoose's The Road of Kings sourcebook, which is an invaluable and largely system-free resource to anyone wishing to run an Age of Conan game using any system. Aesir/Vanir: Hailing from the lands of Asgard and Vanaheim respectively, the Aesir and Vanir are actually offshoots of a single common race, the Nordheimr, and thus share many of the same racial characteristics. They tend to be a broad and muscular race, the Aesir sportin
Post a Comment
Read more

July 30, 2009
The Age of Conan: OD&D in the Hyborian Age Introduction OD&D is, despite what some have argued, a prime system for running adventures in the Hyborian Age. As with any fantasy world placed into a pre-set rules system, however, it requires a few tweaks to the basics. Let's start with the rules needed. Using these rules requires ownership of the OD&D boxed set, plus Supplements I and II. Ownership of Chainmail is highly recommended, as the combat system for Hyborian Age OD&D is drawn from Chainmail. Ownership of supplements III and IV is helpful, but not required so long as the DM has a strong working knowledge of the Hyborian Age. I will, however, be referencing these supplements as they have pre-existing write-ups for Hyborian Age gods, monsters, and heroes. Ownership of the 6 issues of The Strategic Review can be helpful for the inclusion of new character classes, but isn't strictly necessary. For setting information beyond the brief sketch I'
5 comments
Read more

July 29, 2009
Rossika is complete. From here I'll move on to notes about running a Hyborian Age game (Age of Conan) using OD&D. When that's complete, I'll go back to the Wasted Lands.
Post a Comment
Read more

July 26, 2009
Rossika is a vast stretch of largely featureless steppes. The terrain is mostly scrub grass, and the climate extreme. There are two seasons in Rossika: hot, humid summers, and bitterly cold killer winters. A low mountain range separates Rossika from Ashurii and Hastur, insulating Rossika from some of the conflicts that occur in the West. However, copies of The King in Yellow have made it through the mountains and into Rossika from Fennokarelia and the Barren Steppes are not immune to the poison of entropy and madness that afflicts that pallid kingdom. There are three major trade kingdoms in Rossika: Veps to the central north, Mari in the northeast, and the Great Kingdom of Khazan spanning an area in the south equal to that of Veps and Mari combined. The west is dominated by tribes of barbarians who practice a horse culture. Of these barbarians there are two distinct racial types: Kossaki and Hunni. The Kossaki tend to remain in the steppes and flatlands and are of a duskier h
2 comments
Read more

One more, then a break

July 23, 2009
When I complete the writeup for Rossika, I will have completed the pseudo-European and -African continents. After that I'm going to break from the Wasted Lands to explore the Hyborian Age for a bit. That's burning at me, and after Rossika I think I've got a really nicely serviceable campaign area for sandbox play. That's not to say I'm done with the Wasted Lands completely--far from it. When I finish the Hyborian Age I'll come back to it and cover Lemuria, Mu, Atlantis, Thule, and Fortriu in a chunk. The final chunk will deal with Cruithnia, Huitzilopochtitlan, Yuggoth, and the ruins of R'lyeh. I hope everyone's enjoying the sandbox thus far. There have been almost no comments on any of the writeups...
1 comment
Read more

An Argument for Ability Checks in OD&D...

July 22, 2009
I'll preface this by saying I'm a fan of ability checks. Always have been. I also understand and appreciate the ultra-light rules approach of OD&D. The more systems you bolt on, the more of a Pandora's Box you open up, risking making OD&D something it's not. Up till now most (okay, all) of the systems I've toyed with herein were modifications of existing systems (Chainmail for combat and Saving Throws, for example) rather than the addition of new ones. However, I'm considering an Ability Check system. "Why?" cry the traditionalists. "Why would you do something so... new school with OD&D!?" A very valid question. And the simple answer is, because it works and doesn't hurt the game. It allows me to adjudicate pretty much any situation without resorting to judgment calls and DM fiat with which my players may vehemently disagree. So long as a system doesn't hurt or slow down the play, I'd argue, it's not n
2 comments
Read more

Gazetteer of the Wasted Lands 5: Hastur

The Realm of Hastur is a blighted realm of pure, alien sickness and madness. If Ashurii is decadent and corrupt, Hastur is debauched and entropic. If Khem is a paragon of law and civilization, Hastur is one of chaos and violence. The land is jointly ruled by two mad kings who some say are living embodiments of the Ancient One, Yhtill. The land in Hastur is entirely blighted. Grass and trees are yellow or brown, and even the people appear jaundiced and sick. The streets themselves are coated with sickly yellow dust or pale green slime (some of which may actually be Green Slime--the monster). Nothing grows, which leads one to wonder what sustains the inhabitants. The King in Yellow is the supreme ruler of Hastur and lord of its capitol, the jaundiced city of Carcosa, while The Phantom of Truth lords over the city of Aldebaran. The Yellow King, also called the Last King, is seen only as an emaciated figure wearing tattered yellow robes that seem to blow as though in a desert wi
2 comments
Read more

July 13, 2009
It's become clear that my actual OD&D rules blogs get more attention and comments than the sandbox stuff does. Are people actually interested in the Gazetteer of the Wasted Lands, or would people prefer I switched to something a bit more familiar--say, the below-mentioned OD&D Hyborean Age thoughts I've got boiling in my brain?
5 comments
Read more

July 09, 2009
I should probably refrain from posting my thoughts on this until I'm done with the Wasted Lands Gazeteer, huh?
Post a Comment
Read more

July 07, 2009
I am thinking along the lines of a more Robert E. Howardesque version of sorcery. The class would be called "Sorcerer," and replaces both clerics and magic-users. Sorcerers have the fighting capability and saving throws of magic-users (save that they gain +3 to save vs. any kind of magic), but turn or control undead as clerics and have the hit dice of clerics. The magic system is as laid out in Chainmail , using Spell Complexity, with slight modifications. 1. The Complexity of any given spell is its level. An interpretation of the system: Chainmail gives 3 values (Negate, Delay, Immediate) for 2d6 roll results. I've always assumed these as ranges. Thus for a Seer casting a level 1 spell, 5 or below fails, 6-7 is a delayed effect, and 8+ is immediate. An easier way to list this would've been "6/8" for Delayed/Immediate target numbers, but who is to figure out the intricacies of Gygax and Perrin's minds? 2. Sorcerers are still restricted as to th
4 comments
Read more

July 02, 2009
Just updated the Gazeteer with the deities of Ashurii...probably one of the most complex pantheons I've yet compiled. I say "compiled" because this is all drawn from real-world myth, not fiction (though I've certainly fiction alized it for my own purposes!) Enjoy.
Post a Comment
Read more
More posts