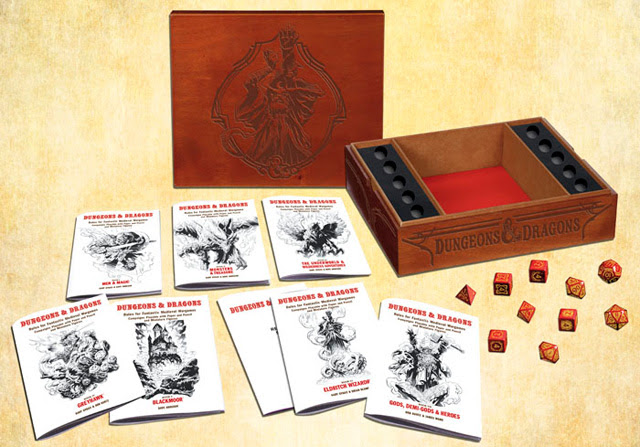 To put a crown jewel on their “Premium Reprint,” series, Wizards of the Coast has re-released the original Dungeons & Dragons rules. Specifically, this reprint is of the sixth printing, or “OCE” (Original Collector’s Edition) version of the rules. Like many fans of the old school, I was rather excited and more than a little nervous about this product. For $150, would they screw it up? Would it be handled properly? Would it, unlike the reprints for second and third editions, truly be premium?

Yesterday, I headed to my FLGS and picked up my OD&D Premium Reprint. Here are my thoughts.

This set is really nice. It comes in an actual wooden box, a nice nod to the original rules which came in a printed woodgrain box. The box construction is sturdy and just overall excellent. It has a nice velvet pad on the bottom to keep from scratching your table, and velvet lining inside. The inside lid contains gorgeous inlaid art of a wizard blasting his foes to smithereens. The box top has a laser etched dragon ampersand, and the front of the box, also laser etched, has the D&D logo.

Inside, the books sit snugly in a center opening and are surrounded by a set of premium dice. These dice are of good quality and look neat. As a side note, mine roll well, too.  Folded cardboard inserts keep everything in place. You’ll want to remove these, as the one in the top lid obscures the artwork and they all take up a lot of space that can be better used otherwise: there's PLENTY of room in the box to add your own books to the mix. I added copies of Chainmail, Swords & Spells, two Age of Conan booklets that I put together for my home game, and a couple booklets of notes on Chainmail Combat and general notes on OD&D, and a Sword and Sorcery adventure generator. And there’s still room for a couple more.

Since the books fit so perfectly into the opening, WotC included a ribbon bookmark that can be used to easily lift the whole stack out of the box--a nice touch. The dice, unfortunately, sit very snugly in their foam trays and can be a bit tough to work free.

The books themselves are not as sturdy as the originals; WotC used thinner stock for both the covers and interiors. That's not to say they are cheaply constructed--they're not--they're just not as substantial as the originals. Still, they’re as well put-together as one could expect pamphlet-sized, saddle-stitched (stapled) booklets to be. Cover stock is white, but still has the marbleized textured indentations that were on the original covers. WotC decided to replace the original cover art with new artwork, which is cool, mostly variations and modernizations on the original themes. It's disappointing to see monochrome line art on the latter two supplement books which had color cover art originally, though.

The layout was redone--it matches the original but looks overall cleaner and easier to read. The interior art has not been redone and is the classic awful, amateurish art we all have come to know and love.

The numbering of the books themselves is changed. Originally, D&D consisted of three books: Men and Magic, Monsters and Treasure, and The Underworld and Wilderness Adventures. These books were numbered “Book 1” through “Book 3.” The other four books were then numbered as “Supplement 1” through “Supplement 4.” In the reprint, the books are simply numbered Book I to Book VII. Where this becomes an issue is that it basically declares all four supplements as core—in truth there are many OD&D gamers who prefer to not use the four supplements. It’s my opinion that WotC should’ve left the original numbering in play.

I believeWotC made a big mistake by not including reprints of Chainmail and Swords & Spells with the rest of the books. For those unaware, while the booklets contain the then-alternate d20-based combat system with which we’ve all become intimately familiar, originally the idea was that players owned the original Chainmail miniatures rules, and many places in the core books reference Chainmail for rules—for example, halflings are noted to have “deadly accuracy with missiles, as per Chainmail.” Most people simply score this as giving Halflings +1 to hit with ranged weapons, and many of the other direct references can be similarly intuited, but it still is helpful to have that book handy. Swords & Spells, by comparison, forms little more than a curiosity—it’s the original D&D-branded mass combat rules. It stands mostly diceless and aside from being referenced in the first edition DMG, isn’t widely used. Still, there are some neat and interesting gems in there, and it does form part of the OD&D canon; as such, it probably should’ve been added to the reprint. As noted earlier, I made my own “reprint” copies of Chainmail and Swords & Spells from original copies I own, and added them.

The Conan and Elric mythoi have been excised from Gods, Demi-Gods, and Heroes. While disappointing, this is not unexpected—it’s highly unlikely WotC would’ve paid for those licenses just for a limited edition reprint. If you have a chance to track down these missing pages, though, I recommend them. They are very good stuff.

Speaking of omissions, I was a little disappointed that they left the "Corrections" page at the end of Greyhawk rather than incorporating the errata. It seemed a little lazy.

Much like other WotC Premium Reprints, this one sports a premium price. The entire package is going to net you a cool $150 from your FLGS ($109 or so if you hit up Amazon). Yes, $150 is a good bit of bank, but if you consider that for the 2e and 3e reprints, each of the cores was $50, and you get the same amount of material here, albeit in a more compact and concise format and in a far nicer presentation, it's in line with the other premium reprints and actually feels PREMIUM, for a change.

- People are going to complain about the $150 price tag
- Chainmail and Swords and Spells are not included
- No Conan or Elric mythoi in Gods, Demi-Gods, and Heroes
- Renumbering of the books makes supplements seem like they’re core
- Dice can be tricky to get out

Overall, this is the first Premium Edition Reprint that WotC has done that really and truly feels premium. I haven't been this excited to hold a D&D product since my 5th edition white box came in the mail several years ago. I'm extraordinarily happy with my purchase, and I might consider picking up a second one from Amazon to leave shrinkwrapped on the shelf.
Chainmail Combat Systems D&D OD&D Original Dungeons & Dragons Reprints