Showing posts from October, 2012
Show all

October 24, 2012
MONSTERS AND ORGANIZATION This section illustrates a part of the art of DMing that is perhaps lost on a lot of people now, but which post-3.x D&D actually tried to bring back a bit (to its credit). Monsters use tactics and behave in logical fashion.  The section deals heavily with the idea that  DM must be prepared for all eventualities, and should prepare in advance the course of action a given monster or group of monsters will take in the event PCs take any number of logical possible approaches to them. While a DM must be able to think on his feet and it's true PCs will often think of things the DM did not, this section isn't concerned with detail-oriented breakdowns of every PC strategy. Rather, the idea is, "how will monsters react if surprised/ambushed, if openly engaged, or if an effort to parlay is made."  These are the three basic things that can happen in an encounter. Also of importance here is what will happen if the PCs leave and return to enc
Post a Comment
Read more 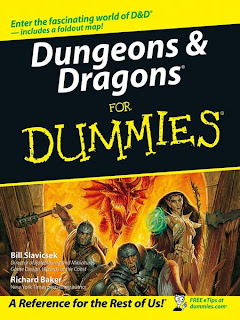 The answer to the above question is simple: D&D lost its way and ceased to truly be D&D, when it got so complicated that it required this: And it never went back:
8 comments
Read more

October 10, 2012
Before I dive into this section, I'd just like to mention that I'm now using my fancy new Premium Reprint version of the DMG, and I'd still encourage any old school fans out there to support this effort. Unlike the 3.5 reprints, these are pretty reasonably priced and quite frankly, they're really nice quality . Even if you've already got the books, I'd still recommend these, just for the overall quality and to support the effort of WotC re-releasing the best versions of the game from days gone by. NON-PLAYER CHARACTERS Personae of Non-Player Characters This has always been one of my favorite parts of the DMG, and is also the cause of one of my favorite "disconnects." The section in question consists of a set of tables designed to help the DM create NPCs on the fly. The tables cover everything from alignment to personality. Even sanity and interests and collections are covered.  The tables in question are (entries in parentheses indicate sub-tab
Post a Comment
Read more

Oops! To tide you over: First Edition vs. Second

October 08, 2012
I'd hoped to write the next installment of reading AD&D today over my lunch break, but got caught up talking with some friends. This week, I promise, it's coming. To tide you over, here's the text of the conversation between Bill and I. Jason: Second edition AD&D reprints in May Bill: Oh, hey, man. Bill: You know, I've never even read through the 2E core books fully. Have had them on my hard drive for a while now. Jason: Heh. Jason: 2E is not bad. It's really not all that different from 1E Jason: Just better organized, a bit more intuitive in some ways, and they removed the monk, assassin, and half-orc from the core book. Bill: That's what I gathered from the parts I did read. It all feels a bit more sterile than 1E, though. It's like it is missing that gloomy weirdness that made 1E 1E, you know? Bill: There is a certain...self-awareness...to 2E, I guess. Jason: Yes, it's definitely more polished in its
4 comments
Read more

October 02, 2012
Because I am sometimes a complete tool who spends money on things I don't need, I picked up the reprints of the D&D 3.5 books on Friday. Really, I wanted to support the effort of WotC releasing, well, anything not fourth edition. I sat down to page through the DMG and noticed, to my surprise and delight, that the example of play listed in the DMG is the exact same scenario as the one in the first edition DMG. The major changes are the inclusion of the 3.5 iconics (Mialee, Lidda, et. al.) and the difference in rules. I thought this would create an absolutely fantastic opportunity to highlight the change in style assumption between old school and later edition D&D gaming. I will attempt to do so without value judgement, just highlighting what I view as the difference in play style between the two editions, and hopefully explore how D&D has evolved from one to the other over the years. I should put forth the caveat here that while AD&D first edition is hands down m
4 comments
Read more
More posts