There's a lot to dig into, in this section, which encompasses only about 2.5 pages of text, but is crammed with information. It begins with a discussion of how to keep excitement in your game when it becomes rote. This is something, I think, most long-term DMs can empathize with. There comes a point where you realize you're recycling ideas and there are only so many city murder mysteries, political intrigue stories, and standard dungeon crawls your characters can handle, and you want to kick it up a notch.

The section discusses the delicate balance of keeping the game challenging and dangerous, but not so deadly as to be un-survivable. It notes that there always has to be a balance between gain, loss, and risk, and that in a long campaign there needs to be an overarching story--what in modern terms is called a "big bad." It says that this big bad doesn't have to feature in every game, and indeed probably shouldn't feature until the mid-levels of the characters, when hints and clues to the larger events in play begin to appear.

The section posits that by building the heroes from "less than pawns" to heroes able to become embroiled in events of cosmic significance, the game will continue to be engaging. It's important, then, to keep upping the stakes. It also goes on, however, to remind the DM that sometimes you just need to have fun, and presents references to dungeon levels based on Alice in Wonderland and King Kong as examples (many will recognize these as references to the adventure modules that would later be released as Land Beyond the Magic Mirror, Dungeonland, and Isle of the Ape.

Gygax then takes the stance that he understands not everyone has hours to put into preparing their games to this level, and suggests the many adventure modules published by TSR could be a big help in that area. Clever marketing, albeit combined with truth.

It then goes on to present one of the most interesting sections of the work, in an historical sense: guidelines to crossover AD&D with Boot Hill and Gamma World.

Sixguns & Sorcery
Boot Hill, for those unaware, was the first western role playing game. Originally published in the same digest-sized, saddle-stitched format as the original D&D books, it later went through multiple editions, with the core system heavily revised over the years, and presaged games like Kenzer & Co's Aces & Eights. It's a game that, I think, that is due for a revival in the 5th edition era, and if WotC would like an experienced game designer with a solid grasp on 5e mechanics to tackle it, I'm taking calls. But that's neither here nor there. 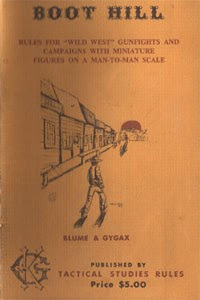 This section focuses largely on conversion stats between Boot Hill and AD&D. What makes this (and the following section) historically interesting is that it is, to my knowledge, the first time such an attempt to convert and combine two wildly divergent games ever occurred outside of a fanzine article (and as it existed at this point in time, I'm still counting The Dragon as a fanzine; it hadn't quite reached the level it would in later years). Today this seems like business-as-usual; we all convert and lift ideas from one game to another. Back then, however, the idea of cowboys in D&D was pretty revolutionary.

The character ability conversions themselves are brief, but very comprehensive. One thing that jumped out at me right away was the strange difference in converting Dexterity score. When converting from AD&D to Boot Hill, a character's Dex score = their BH % score. When converting a BH character the other way, however, their Dex begins at 6 and gets +1 per 10%, to a max of 16. Why not us the same conversion both ways, with AD&D heroes subtracting 6 from their score, then multiplying the result by 10 to get an accurate BH Dex?

I admit that, though owning the original digest BH, I am not overly familiar with the system, so it could well just be the difference in how Dex works between the two games. It's just something I noticed.

It provides level, AC, saving throw, fighting ability and movement equivalencies between the two systems, how to determine first shot ability from fantasy characters, to-hit modifiers, how to convert BH wounds to hit point damage ratings, and more. If you've ever wanted to bring gunslingers into your AD&D game, this is a really solid start.

Mutants & Magic
Next up, we dive into adding zany, superscience, post-apocalyptic sci-fi to your fantasy game. If you're looking to run AD&D with a Thundarr the Barbarian style, this is the section for you. That's right, folks: we're talking about converting your game to Gamma World (and vice-versa). 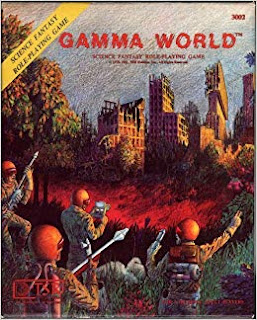 Gamma World, written by Jim Ward, was adapted and expanded from his original Metamorphosis Alpha RPG, which has seen a resurgence over the past couple years, being converted to a wide range of systems, with new editions published by such notable companies Signal Fire Studios and Goodman Games, and forthcoming versions from Troll Lord Games. 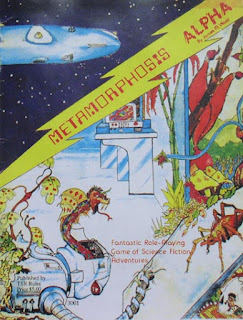 Gamma World was a post-apocalyptic rpg centering around playing mutants with crazy powers and crazier physical features, and also notable for (in the original couple editions) being set in the blasted-out nuclear remains of Pittsburgh (or Pitz-Burke, as it was called). Like Boot Hill, it's gone through multiple editions and revisions over the years, but it lasted even longer, all the way up through the reviled 4th edition of the rules set (though to be fair, the D&D 4e version of Gamma World was quite solid).

The section begins with a reference to a Dragon magazine article that presented a MA conversion, and says that rather than going over that ground again, it's better to expand further and move into the full GW setting. As with the BH section before, it converts ability scores both ways. The conversions for GW are much more straightforward than those for BH, as GW is much more solidly based upon a D&D paradigm, from a system standpoint. It uses similar ability scores, replaces Magic Resistance with Radiation Resistance, hit dice, armor class and the like, though GW characters begin significantly more powerful than AD&D ones.

Because of these core similarities, it's quite easy to simply drop characters from one game into the other, using the combat rules, turn sequence, movement and the like of the game you are playing.

Some interesting observations in this section--it points out that if a magic user doesn't have their spellbooks, they won't be able to regain spells, or at least, their complement will be limited to that which is present in the traveling spellbook which they have with them. Clerics, likewise, will lose access to their deity and thus cannot regain spells higher than second level (remember, earlier we discussed that clerics cast up to second level from their own sheer, personal faith).

It then goes on to discuss the relation between GW mutations and D&D spells; how the two interact and affect each other. Specific spells and mutations are presented as examples: the mental shield mutation, for example, grants +4 on saving throws against mind-affecting magic, while mental control over physical state can overcome paralysis effects and hold spells.

Finally, there's a discussion of "artifacts," which in GW aren't magic, but are super-science items and technology left from before the apocalypse. It discusses that they work similarly to magic items in D&D, and outlines which artifacts are usable by D&D characters, and under what circumstances. At a glance, this section can be a bit confusing, as it references charts A, B, and C, but doesn't clarify that these charts are in Gamma World, not the current book you're reading.

There's then a brief mention of how GW characters would function handling BH firearms, but naturally, it's beyond the scope of the book to convert GW to BH.

All in all, this is a really fun, very thorough, engaging, and progressive (for the time) section of the book. It's one of my favorite parts to read over, and is an inspiration for everything that came later.

Next Up: MAGICAL RESEARCH