My Company Launches Our First Kickstarter!

Debuting the new Elf Lair Games house system, O.G.R.E.S., Night Shift: Veterans of the Supernatural Wars is an urban fantasy, horror, and dark modern supernatural game that uses old-school mechanics derived from the original, basic, expert, and advanced versions of the World's Most Famous Role Playing Game. It allows you to mimic all the tropes of just about any film, TV series, or novels you like.

All of the following are possible with Night Shift:
Night Shift is built to handle just about any sort of urban fantasy you can dream up, using the tropes of classic horror-based television, motion pictures, comics, and novels. 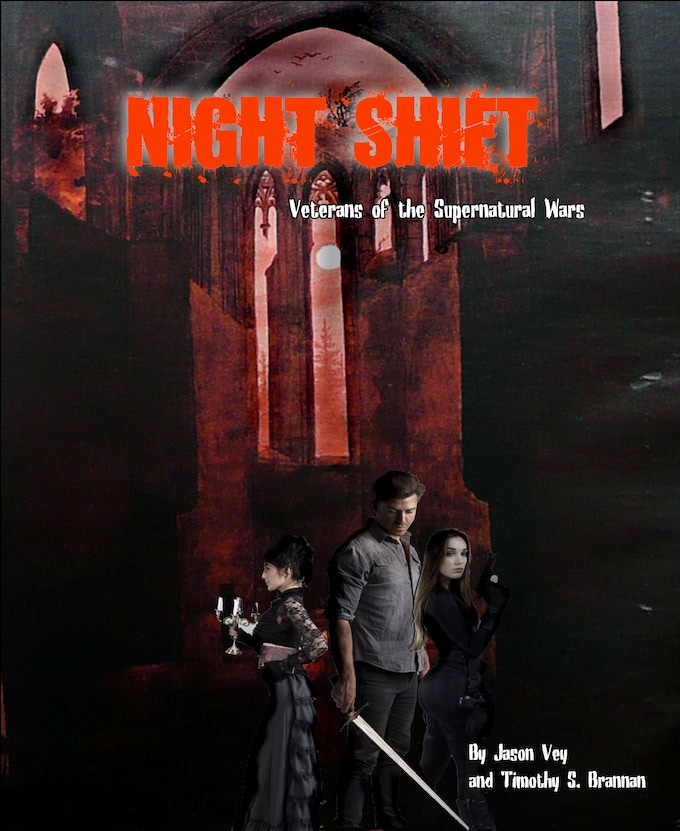 Designed by industry veterans Jason Vey and Timothy Brannan, whose names have appeared in such products as Buffy the Vampire Slayer, Ghosts of Albion, Doctor Who: Adventures in Time and Space, C.J. Carella's WitchCraft, All Flesh Must be Eaten!, Nightbane, Amazing Adventures, Castles & Crusades and more, this game brings together two noted designers with decades of combined experience.

Within its pages, you'll find:

O.G.R.E.S. stands for "Oldschool Generic Roleplaying Engine System." It's the new house system for Elf Lair Games, which will run alongside our current O.R.C.S. and Cd8 Systems. It's another step forward in presenting a new approach to a "unified system" for running just about any kind of game, using mechanics that will be instantly familiar to players of "old school" fantasy games, specifically those that powered the Original, Basic, Expert, and Advanced versions of the World's Most Famous Role Playing Game.

What O.G.R.E.S. does, however, is streamline and codify these mechanics, to remove what many view as arcane and confusing elements, and break the system down into a fast-playing, fun, easy-to-understand, and open presentation, adding a few modern design elements to improve the smooth play.

On a Personal Note

This Kickstarter is kind of a big deal for me. It's an effort to take Elf Lair Games into the realm of a genuine small publisher who can afford to do print runs of books, assign bar codes and ISBN numbers, and eventually, hopefully, get us into distribution. Everything is kind of riding on how well this does, including the release of Spellcraft & Swordplay Second Edition. Will it ruin me if it doesn't fund? No, but it does keep Elf Lair in the bottom tier of our capabilities. So if you can support, please do. $8,000 is a reasonable goal for this puppy, but if we can hit $15,000, I'll be absolutely thrilled.

Anyway, thanks for checking it out. Pledge if you can, and please share it around. Let's make this happen...Carpe Noctem!